Skip to content
Search
Close
The form and content of this entry has been guided by the following question: What would it mean to walk in a world grounded not by a commons, but instead by an uncommons in the sense that the anthropologist Marisol de la Cadena and Mario Blaser propose in the introduction of their anthology, In a World of Many Worlds:

Our proposal is an invitation to think that instead of the sameness that recognition supposes, politics might not start from, nor resolve in ontologically homogeneous grounds. Rather, the grounds of adversarial dispute or of allied agreement would be what we call uncommons… We propose the uncommons as the heterogeneous grounds where negotiations take place toward a commons that would be a continuous achievement, an event whose vocation is not to be final because it remembers that the uncommons is its constant starting point.[1]

Rather than attempt to answer my question, what follows is what I call an “evocation”—a transmission for feeling-thinking with. Its locus is a meditation trail open to the public of East Richmond Heights where I moved at the beginning of March just in time to settle down for California’s COVID-19 stay at home order. Because I no longer commute to CIIS for work and school, I’ve had a lot of time to explore the neighborhood, time enough to discover such gems as the Gyuto Foundation: Tibetan Monastery & Learning Center. Unfortunately social-distancing mandates have kept me (perhaps for more psychological reasons than others) from interacting with the monastery itself, but their meditation trail is another story—it has become a refuge for me.

Separated from Wild Cat Canyon Regional Park only by chain-link fences, the Gyuto Foundation’s, meditation trail, called simply “Path to Enlightenment,” exemplifies the difference between a natural environment presented as pristine nature (Wild Cat Canyon Regional Park) and one ineluctably bound with human worlds of value. Not only does Buddhist iconography—from statues of the Buddha to prayer flags—enliven the trail with meaning, so too do three framed quotations of the 14th Dalia Lama. The latter especially work on me, for their words give the place a voice that might otherwise go unnoticed by those “alphabetized to the core” such as myself.[2]  This voice reminds those who heed it that “we are visitors on this planet,” enjoins us to consider that the “true meaning of life” might consist in the happiness of others, questions the paradoxical outcomes wrought by modernity’s reigning myth of Progress (e.g. “We’ve been all the way to the moon and back, but have trouble crossing the street to meet the new neighbor”), and invites us to consider what the fact of being born into the care of others and dying by the care of others might suggest for the essence of our lives in between those passages.

For those constituted by the bifurcation of nature and culture like myself, the “Path to Enlightenment” presents an explicit coproduction of the two. This is one of the many reasons why I consider the meditation trail evocative of a decolonial concept like the uncommons—it does not take for granted that everyone shares in common a world of pristine and objective nature. Another is for the general hospitality of the trail and the framed quotations’ more focused articulation of what I would call an ethic care, an ethic of the uncommons: an invitation to consider the lives and welfare of others, others whose worlds may diverge from what I know the world to be. “The meaning of life” they suggest could of course be contested, but that’s not the point. There are no evangelists waiting at the end or beginning of the trail, no flyers detailing events—not one trace of intended conversion. Rather, this trail is open to anyone who happens to notice it, as the uncommons might be open to anyone willing to at respectfully accept and negotiate with the worlds of others. I am not a Buddhist and I doubt that most people outside of the monastery who visit are either. But, having visited the trail enough times to be formed by it, I do have slightly altered expectations of what kind of person a fellow visitor might be. There is a palpable difference in the level of ease I feel between walking in Wild Cat Canyon and walking the meditation trail. Of course, the ecology is quite different, more dramatic in the sprawling trails of the former and more sheltered by tree canopies in the latter, yet the difference inheres not only in the so-called natural ecology. No, because of the explicit coproduction of nature and culture presented by “Path to Enlightenment,” and especially for its emphasis on an ethic of care, I feel safer, feel as though my difference might more likely be respected by the others I encounter there. I also feel more inclined to quietly interact with those others and to imagine how they found this place, what it means to them, what their worlds might be like.

I suggested earlier that my ritual of walking the “Path to Enlightenment,” reading its framed quotations, quietly interacting with others, has “formed” in me a certain mode of conduct as a visitor, as well as expectations of and about others who visit—a formation grounded, I would say, on mutual respect. Like walking the “Path to Enlightenment,” to realize an uncommons we must think of it as a practice, as something that we do and are formed by—one that, if given due diligence, could be practiced to the point whereat inter-epistemic relations go beyond political negotiation to afford exchanges that prove mutually transformative in life-enhancing ways. Walking the “Path to Enlightenment,” I’ve been formed to be curious about and imagine the worlds of other visitors—but what might come to be if I were to enjoin the other to tell me about their world? How might it change mine? The three framed quotations have already catalyzed in me a more pronounced sense of the distributed agency affirmed by worlds other than the modern constitution I inherit. As Isabelle Stengers following David Abram describes, most moderns are conditioned by “a strong enchantment of the written text, more precisely of the alphabetic text, the only text that presents itself as self-sufficient.”[3] Like the former two philosophers, I have been involved in efforts to think beyond modernity by retrieving certain marginalized perspectives that helped give rise to it, and to thus cultivate my capacity to perceive a broader reach of enchantment in the nonhuman world. I have begun to see, for example, what Goethe discerned as the archetypal leaf—its formal causation—in the morphological unfolding of plants, a meaning that speaks simply by being itself. Even still, it was written text that spoke its meaning most loudly for me along the “Path to Enlightenment,” an authorial voice that opened the possibility for a larger, more general aura of meaning to saturate the place. That aura heightened my awareness and prompted me to notice what I might otherwise miss. I could recognize, for instance, how the seemingly strategic placement of a Buddha statute across from the first sign might incite the observant visitor to join a conversation that is already being had and potentially bring further attention to the meaningful activity of the nonhuman others who partially constitute this place. The magnification of meaning occasioned by the signs made more vivid for me the distributed agency of participation, a theory I inherit in the practice of philosophy as a contemplation of the metamorphic powers we call ideas.[4]

Walking the path of the uncommons, I learn more about myself and my inheritance by accepting the divergence of another. We must accept that a practice of the uncommons, characterized as it is by the divergence of worlds, entails misunderstandings, struggle, and failure, but I hope that what I share here may impart those who experience it with a sense of possibility for creative exchange, translation spaces of understanding, and harmony—however temporary the latter might be. In what follows I attempt to evoke in the viewer a feeling for the uncommons and the distributed agency I experienced while walking the “Path to Enlightenment.” Importantly, I think, the name of the trail omits using the article “The;” it is, rather, a path to enlightenment. In the same spirit, my offering is not to be interpreted according to what I, the so-called author, “really” meant, rather, what I mean is an attempt to continue the distributed agency of the “Path to Enlightenment” through this following translation, to have undulate through the unique position that is you a feeling-and-thinking-for a practice of the uncommons.

[3] Stengers, “The Challenge of Ontological Politics, 104.

[4] Stengers, “The Challenge of Ontological Politics, 108.


(a field recording to accompany the following evocation)

A band of prayer flags 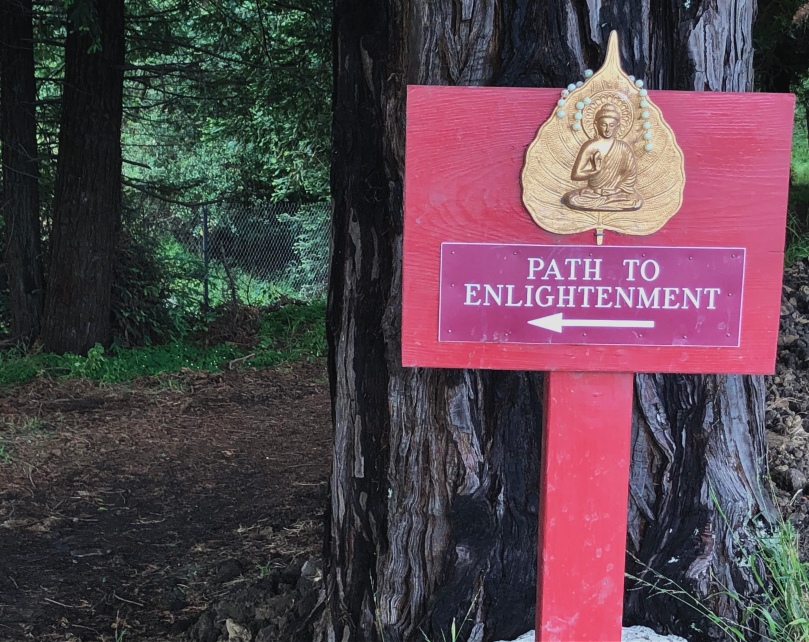 Now walk on some more

passed a bell the wind

Chainsaws work up above:

but a stony buddha pays no mind,

directing my attention there: 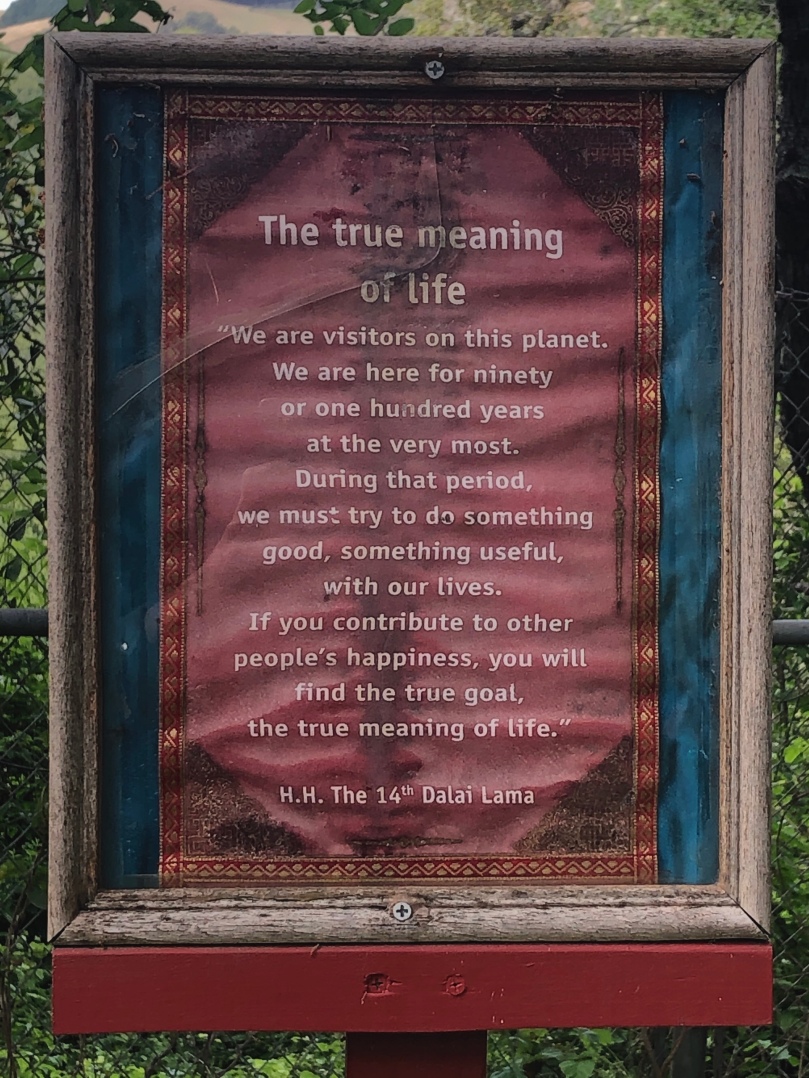 between buddha’s gaze and 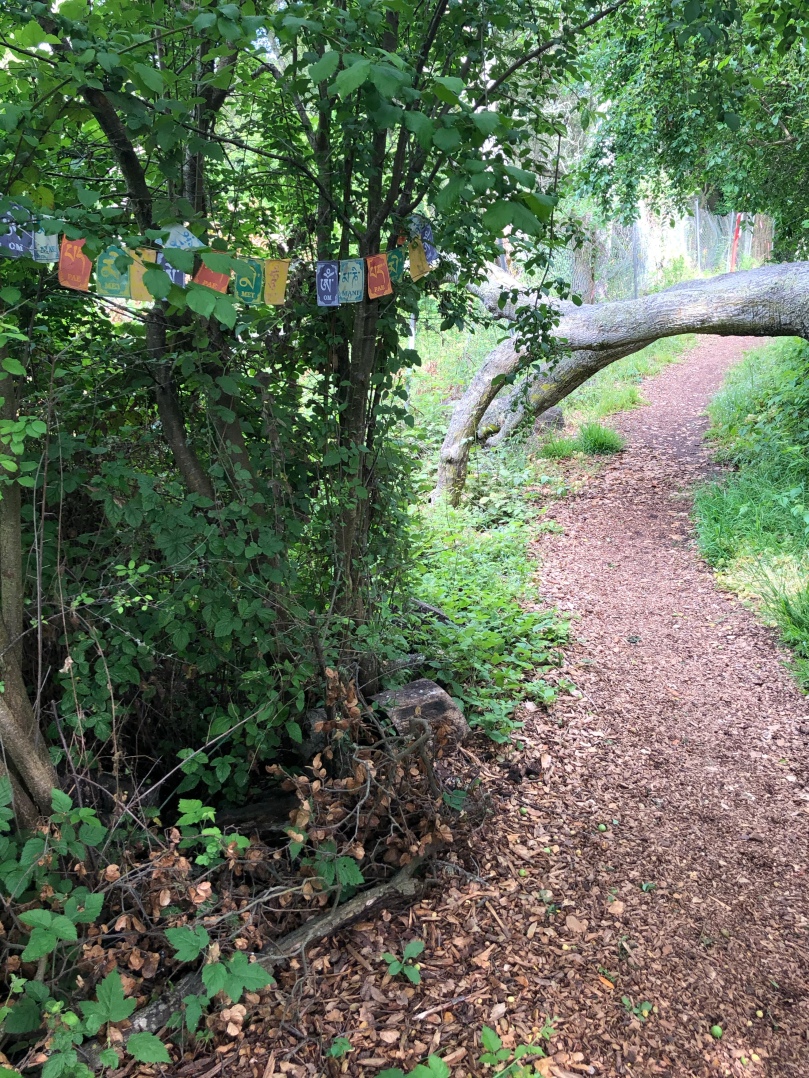 opening us to Wild Cat.

I bow politely to pass under the tree

What do the prayer flags keep at bay?

Before I meet our bench—voices,

sounding somewhere, huddled below a nearby tree.

We greet between green leafy brush

I take my seat; they take leave.

alone with birdsong: I am relieved

And think: “…while out

when will I not

up from our bench, I rise,

making space of space and time

the last Sign meets the gaze of a violently

Sawn stump, the drying corpse of a Tree, 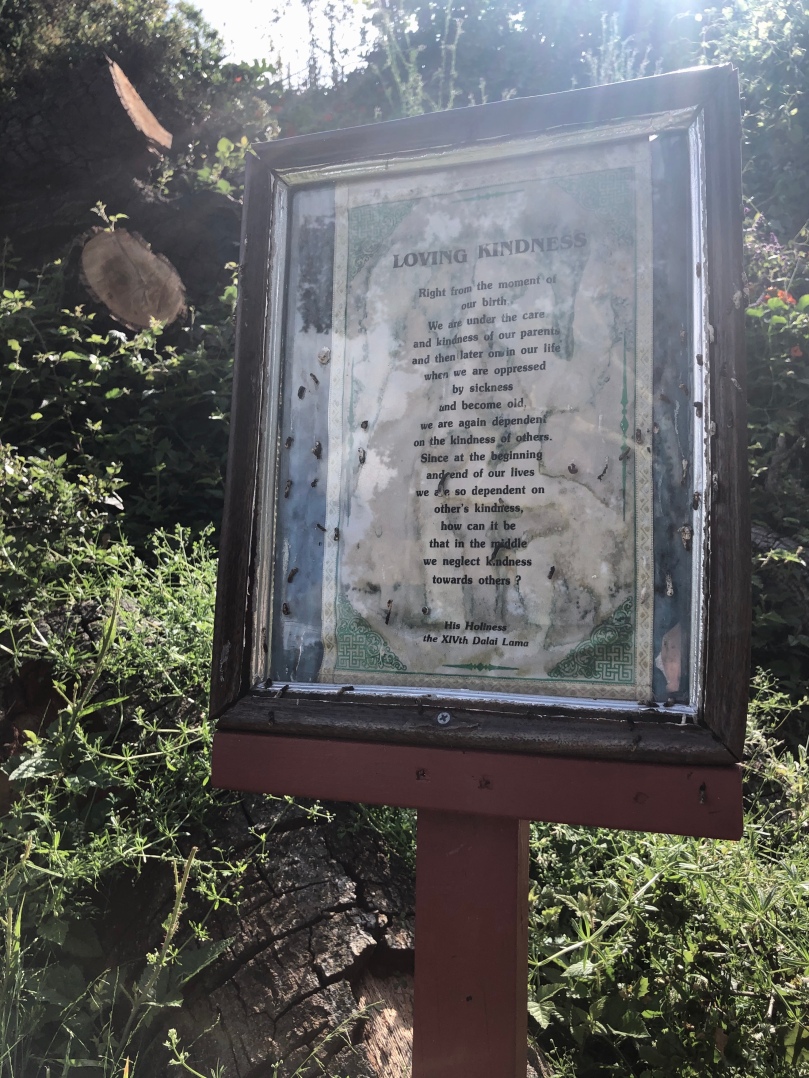 “ When we are oppressed by sickness

and become old… dependent on the kindness

Afterward into an overhang of brush,

last Breath of the path—

in which an empty bird nest

a risk of conversation,

a risk our hearts to break

fallen Tree back through